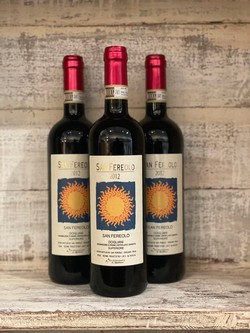 Any visitor to the Four Eleven Wine Shop will instantly recognize how much we love Nebbiolo and the wines of Piedmont.  While Nebbiolo is certainly the headliner of the region in Barolo and Barbaresco, other varieties also make delicious wines for both shorter and longer-term drinking.  Many wine consumers are familiar with other varieties in Piedmont, like Arneis from Roero, or the Barbera d’Alba (Yum, truffles…) but Dolcetto is still a relatively obscure wine. We would bet if you asked 50 sommeliers what are the last 50 wines you drank, Dolcetto would appear maybe once or twice on the entire list. If that…  Why is this so? Perhaps because Dolcetto is a difficult variety in the vineyard and many examples are over-extracted and simple, with black fruits, high tannins, and a lack of acidity.  However, if you speak with many winegrowers in Piedmont, and this was also true historically, they will tell you that Dolcetto graces their table more so than Barbera or Nebbiolo.  For a long time, vignerons proclaimed “sell the Nebbiolo, drink the Dolcetto.”

So for a new variety, let's begin at the pinnacle - Nicoletta Bocca and her top wine, named after her estate, San Fereolo in Dogliani; the premier region for Dolcetto in Piedmont. Originally from Milan, Nicoletta began her dream of winemaking in 1992.  Over a number of years, she acquired a number of parcels, usually from families wishing to move on from farming, totaling about 17 acres.  The estate is predominantly Dolcetto, with a bit of Nebbiolo and Barbera as well.  For Dolcetto, she is fortunate to care for plots planted between 1936 and 1978.

From the Importer “The flagship wine of the cellar, this comprises 40-to-80-year-old vines of high-altitude Dolcetto planted on Nicoletta’s best, most sun-drinking slopes, aged three years in large barrels and an additional four in bottle before ever even seeing the marketplace. Here, Dolcetto’s often foregrounded floral character takes a backseat to mouthwateringly savory earth tones, reminiscent of great Nebbiolo in its mineral presence but with a darkly spicy character that speaks to its variety of origin. The aforementioned use of submerged-cap fermentation—the first vintage in which Nicoletta employed the practice—imbues this 2012 with a striking litheness that gorgeously offsets its signature muscularity; this is slightly lighter in spirit yet even more penetratingly mineral than past vintages have been, and it offers irresistible drinkability.”