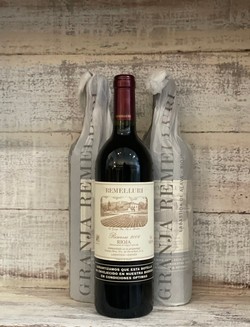 It’s not often you get a 15-year-old wine released from the winery in a perfect window of drinking, AND it can age seamlessly for another 15. When you add that to the fact that it’s coming from one of the greatest estates in Rioja, it’s icing on the cake!

Remelluri has been shepherding change from the old “house styles” of Rioja made by most wineries to the single-plot style of winemaking to showcase their terruño – or sense of place. The site of the winery has been following that individual style for almost a thousand years. Count Erramel, a basque warrior from Álava, founded a village on the site (uri in Basque) and it continued to grow into a Heironymous Monastery - known as Remelluri, a combination of Erramel and uri.

The first wines made at the Monastery date back to the mid-sixteenth century, and the monks continued making wines on the site until they abandoned it years later. However, hermits continued to stay in the village and the local hermits continued to maintain the original shrine. The village grew under the Real Divisa, a religious order, and small blocks of vineyards and farms took over the area. In the 19th century, the entire area was split up and sold off, after ownership was taken away from the churches all over the land. Although the land was split up, there were so many small plots that continued to be farmed continuously over the next century. Then in 1967, the next chapter of Remelluri began when the property was purchased by Jaime Rodríguez Salís.

Rodriguez continued to dance to the beat of a different drummer, just as those in the village had done previously. While the rest of Rioja was sticking to their large estate styles of winemaking, they reinvigorated the small plots which surrounded the original estates. They also began working with the small villages around the estate which used to be part of the original plots. By working with the people in these areas they continued the tradition of the small plot concept and individual teruña.

In 2009 Telmo Rodríguez (winemaker) and Amaia Rodríguez Hernandorena (viticulturist) took over the property from their parents, and enlisted the help of Pablo Eguzkiza - who trained at Petrus. They continue to be very individualistic in their approach to winemaking in the area - by sticking with small plots, vinifying separately, and blending. This achieves the best wines, in their opinion. Their motto is “The future is in the past.”

The 2006 Reserva is a wine that is sourced from six of their small plots, which range from 1500’ to 3000’ elevation in Rioja Alavesa, from three different villages. The wine is primarily Tempranillo, with a small amount of Garnacha, and Graciano. It is fermented in stainless steel, and wooden foudres utilizing indigenous yeasts. The wines are then aged in wood of various sizes, depending on the variety and vineyard.

The flavor profile is a little like their motto, as it has a little of the old with a lot of the new. The fruit is fresh and vibrant, with lots of vanilla-cream cherries, clove, and a hint of anise. The wine also has a little funk, which most would hate not to see in Rioja. Regardless of how new in style many of these wines are, it would just not be Rioja without a little barnyard - but it is perfectly integrated.